Systemic Lupus Erythematosus (SLE) is an autoimmune disease characterized by acute and chronic inflammation of various tissues of the body. It’s also known to as Disseminated lupus erythematosus or LE syndrome or Libman-Sacks disease or Lupus. Autoimmune diseases are illnesses that occur when the body’s tissues are attacked by its own immune system. The immune system is a complex system within the body that is designed to fight infectious agents, such as bacteria and other foreign microbes. One of the ways that the immune system fights infections is by producing antibodies that bind to the microbes. People with lupus produce abnormal antibodies in their blood that target tissues within their own body rather than foreign infectious agents. These antibodies are referred to as autoantibodies.

Because the antibodies and accompanying cells of inflammation can affect tissues anywhere in the body, lupus has the potential to affect a variety of areas. Sometimes lupus can cause disease of the skin, heart, lungs, kidneys, joints, nervous system, and/or blood-forming (hematopoietic) system. When only the skin is involved by rash, the condition is called lupus dermatitis or cutaneous lupus erythematosus. A form of cutaneous lupus erythematosus that can be isolated to the skin, without internal disease, is called discoid lupus erythematosus. When internal organs are involved, the condition is referred to as systemic lupus erythematosus (SLE).
Both discoid lupus erythematosus and systemic lupus are more common in women than men (about eight times more common). The disease can affect all ages but most commonly begins from 20-45 years of age. Statistics demonstrate that lupus is somewhat more frequent in African Americans and people of Chinese and Japanese descent. 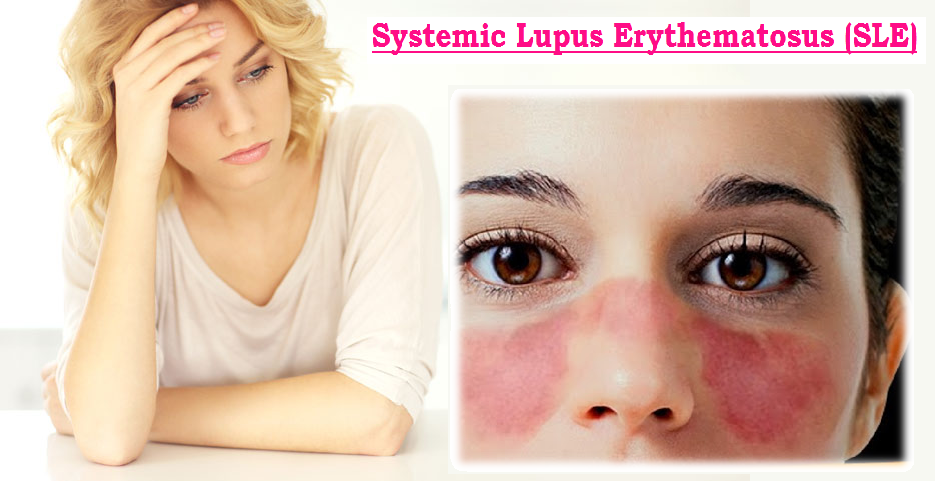 Systemic Lupus Erythematosus (SLE) has been estimated to affect about 322,000 people worldwide and 1.5 million people in the United States. The exact prevalence is difficult to determine because many of the signs and symptoms of SLE resemble those of other disorders. Diagnosis may be delayed for years, and the condition may never be diagnosed in some affected individuals. Females develop SLE about nine times more often than males. It is most common in younger women, peaking during the childbearing years; however, 20 percent of SLE cases occur in people over age 50.
For unknown reasons, in industrialized Western countries SLE has become 10 times more common over the past 50 years. The prevalence of SLE in Africa and Asia is believed to be much lower than in Western nations; however, in industrialized Western countries, people of African and Asian descent are two to four times more likely to develop SLE than are people of European descent. Researchers suggest that factors such as ethnic mixing, tobacco use in industrialized countries, and the different types of infections people acquire in different regions may contribute to these differences. For example malaria, which occurs often in tropical regions, is thought to be protective against SLE, while the Epstein-Barr virus, more common in the West, increases SLE risk.

Normal variations (polymorphisms) in many genes can affect the risk of developing SLE, and in most cases multiple genetic factors are thought to be involved. In rare cases, SLE is caused by mutations in single genes. Most of the genes associated with SLE are involved in immune system function, and variations in these genes likely affect proper targeting and control of the immune response. Sex hormones and a variety of environmental factors including viral infections, diet, stress, chemical exposures, and sunlight are also thought to play a role in triggering this complex disorder. About 10 percent of SLE cases are thought to be triggered by drug exposure, and more than 80 drugs that may be involved have been identified.

In people with SLE, cells that have undergone self-destruction (apoptosis) because they are damaged or no longer needed are not cleared away properly. The relationship of this loss of function to the cause or features of SLE is unclear. Researchers suggest that these dead cells may release substances that cause the immune system to react inappropriately and attack the body’s tissues, resulting in the signs and symptoms of SLE.

The precise reason for the abnormal autoimmunity that causes lupus is not known. Inherited genes, viruses, ultraviolet light, and certain medications may all play some role. Lupus is not caused by an infectious microorganism and is not contagious from one person to another.

Some scientists believe that the immune system in lupus is more easily stimulated by external factors like viruses or ultraviolet light. Sometimes, symptoms of lupus can be precipitated or aggravated by only a brief period of sun exposure.

It also is known that some women with systemic lupus erythematosus can experience worsening of their symptoms prior to their menstrual periods. This phenomenon, together with the female predominance of systemic lupus erythematosus, suggests that female hormones play an important role in the expression of SLE. This hormonal relationship is an active area of ongoing study by scientists. 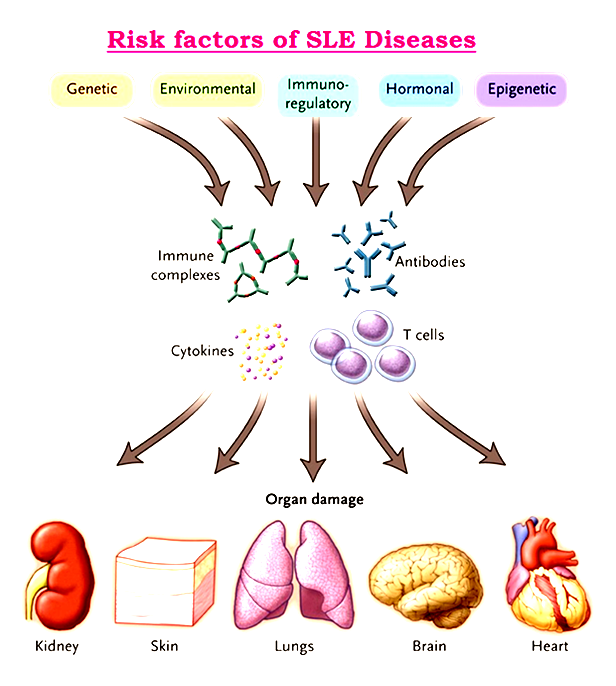 Symptoms of systemic lupus erythematosus (SLE, often referred to as simply lupus) can be quite different, because there are different types of lupus, and not all affected people show the same symptoms. It may come on suddenly or develop slowly, may be mild or severe, and may be temporary or permanent. Most people with lupus have mild disease characterized by episodes – called flares – when signs and symptoms get worse for a while, then improve or even disappear completely for a time.The signs and symptoms of lupus that you experience will depend on which body systems are affected by the disease. People with SLE can develop different combinations of symptoms and organ involvement. The most common signs and symptoms include:

Complications of organ involvement can lead to further symptoms that depend on the organ affected and severity of the disease.

Since SLE patients can have a wide variety of symptoms and different combinations of organ involvement, no single blood test establishes the diagnosis of systemic lupus. To help doctors improve the accuracy of the diagnosis of SLE, 11 criteria were established by the American Rheumatism Association. These 11 criteria are closely related to the symptoms discussed above. Some people suspected of having SLE may never develop enough criteria for a definite diagnosis. Other people accumulate enough criteria only after months or years of observation. When a person has four or more of these criteria, the diagnosis of SLE is strongly suggested. Nevertheless, the diagnosis of SLE may be made in some settings in people with only a few of these classical criteria, and treatment may sometimes be instituted at this stage. Of these people with minimal criteria, some may later develop other criteria, but many never do.
The following are 11 criteria used for diagnosing systemic lupus erythematosus:

The combination of blood and urine tests, signs and symptoms and physical examination findings leads to the diagnosis. Common test are as follows :

B. Imaging tests :
If doctor suspects that lupus is affecting lungs or heart, he or she may suggest:

Lupus can harm kidneys in many different ways, and treatments can vary, depending on the type of damage that occurs. In some cases, it’s necessary to test a small sample of kidney tissue to determine what the best treatment might be. The sample can be obtained with a needle or through a small incision. Skin biopsy is sometimes performed to confirm a diagnosis of lupus affecting the skin. 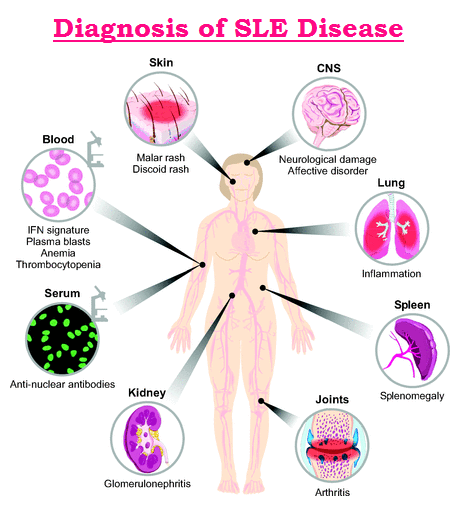 There is no permanent cure for SLE. The goal of treatment is to relieve symptoms and protect organs by decreasing inflammation and/or the level of autoimmune activity in the body. The precise treatment is decided on an individual basis. Many people with mild symptoms may need no treatment or only intermittent courses of anti-inflammatory medications. Those with more serious illness involving damage to internal organ(s) may require high doses of corticosteroids in combination with other medications that suppress the body’s immune system.
People with SLE need more rest during periods of active disease. Researchers have reported that poor sleep quality was a significant factor in developing fatigue in people with SLE. These reports emphasize the importance for people and physicians to address sleep quality and the effect of underlying depression, lack of exercise, and self-care coping strategies on overall health. During these periods, carefully prescribed exercise is still important to maintain muscle tone and range of motion in the joints. To protect from sun sensitivity, sunscreens, sun avoidance, and sun protection clothing are used. Certain types of lupus rash can respond to topical cortisone medications.
Treatment for lupus depends on the signs and symptoms of patients. Determining whether signs and symptoms should be treated and what medications to use requires a careful discussion of the benefits and risks with doctor. As signs and symptoms flare and subside, patient and doctor may find that patient will need to change medications or dosages. The medications most commonly used to control lupus include:

SLE is undoubtedly a potentially serious illness with involvement of numerous organ systems. However, it is important to recognize that most people with SLE lead full, active, and healthy lives. Periodic increases in disease activity (flares) can usually be managed by varying medications. Since ultraviolet light can precipitate and worsen flares, people with systemic lupus should avoid sun exposure. Sunscreens and clothing covering the extremities can be helpful. Abruptly stopping medications, especially corticosteroids, can also cause flares and should be avoided. People with SLE are at increased risk of infections as SLE-related complications, especially if they are taking corticosteroids or immunosuppressive medications. Things can do at home to help control symptoms of lupus include:

Therefore, any unexpected fever should be reported to medical professionals and evaluated.