Skip to content
4.8
(1862)
Celiac disease is a hereditary genetic autoimmune disorder where the ingestion of gluten leads to damage in the small intestine. It is estimated to affect 1 in 100 people worldwide. The prevalence of celiac disease was 4% in South America, 0.5% in Africa and North America, 0.6% in Asia, and 0.8% in Europe and Oceania. According to experts at the All India Institute of Medical Sciences, New Delhi Celiac disease affects close to six to eight million people in India. Celiac disease must not be confused with gluten allergy or its intolerance. It is a kind of an autoimmune disorder occurring in people who are genetically predisposed. Maximum cases are undiagnosed and are at risk for long-term health complications.
Celiac disease is hereditary, meaning that it runs in families. People with a first-degree relative with celiac disease (parent, child, sibling) have a 1 in 10 risk of developing celiac disease. Celiac disease is also known as Coeliac disease, Celiac sprue, Non-tropical sprue, and Gluten sensitive enteropathy.
Celiac disease occurs from an interaction between genes, eating foods with gluten and other environmental factors, but the precise cause isn’t known. Infant feeding practices, gastrointestinal infections and gut bacteria might contribute to developing celiac disease.

Sometimes celiac disease is triggered – or becomes active for the first time – after surgery, pregnancy, childbirth, viral infection or severe emotional stress. When the body’s immune system overreacts to gluten in food, the reaction damages the tiny, hair-like projections (villi) that line the small intestine. Villi absorb vitamins, minerals and other nutrients from the food you eat. If your villi are damaged, you can’t get enough nutrients, no matter how much you eat.
Some gene variations appear to increase the risk of developing the disease. But having those gene variants doesn’t mean you’ll get celiac disease, which suggests that additional factors must be involved. The rate of celiac disease in Western countries is estimated at about 1 percent of the population. Celiac disease is most common in Caucasians; however, it is now being diagnosed among many ethnic groups and is being found globally.

The signs and symptoms of celiac disease can vary greatly and are different in children and adults. The most common signs for adults are diarrhea, fatigue and weight loss. Adults may also experience bloating and gas, abdominal pain, nausea, constipation, and vomiting. However, more than half of adults with celiac disease have signs and symptoms that are not related to the digestive system, including:

In Children under 2 years old, typical signs and symptoms of celiac disease include: 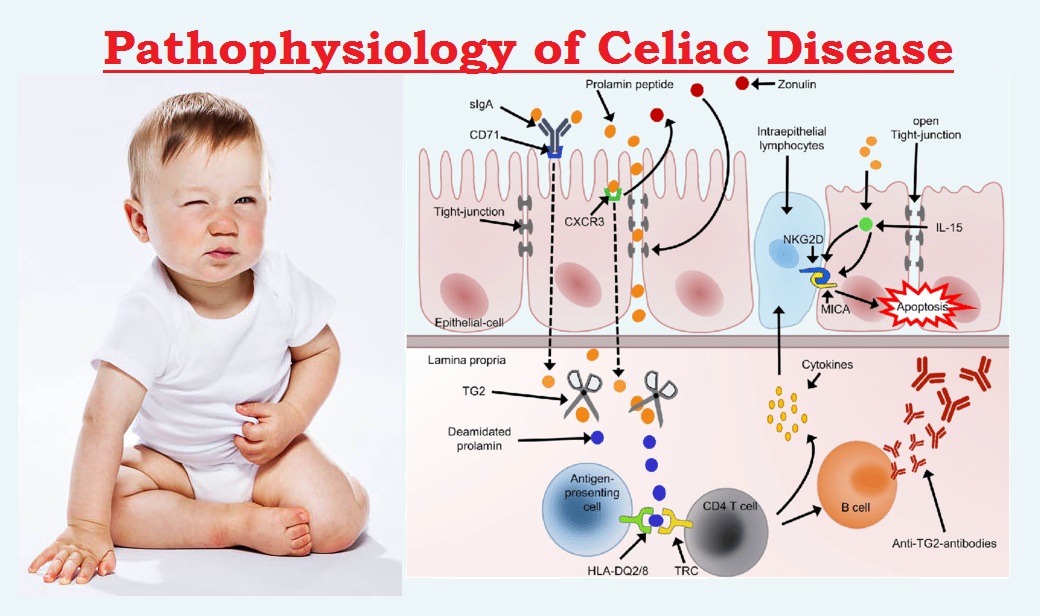 Celiac disease can affect anyone. However, it tends to be more common in people who have:

Researchers estimate that only 20 percent of people with celiac disease may receive a diagnosis.

Untreated, celiac disease can cause:

A strict, lifelong gluten-free diet is the only way to manage celiac disease. In addition to wheat, foods that contain gluten include:

Doctor may refer to a Dietitian, who can help the patient & plan a healthy gluten-free diet.
Once remove gluten from the diet, inflammation in the small intestine generally begins to lessen – usually within several weeks, though the patient may start to feel better in just a few days. Complete healing and regrowth of the villi may take several months to several years. Healing in the small intestine tends to occur more quickly in children than adults. If the patient accidentally eat a product that contains gluten, he/she may experience abdominal pain and diarrhea. Some people experience no signs or symptoms after eating gluten, but this doesn’t mean it’s not harmful to them. Even trace amounts of gluten in his/her diet can be damaging, whether or not they cause signs or symptoms. Hidden gluten can be present in foods, medications and nonfood products, including:

Celiac disease can’t be prevented. If the patient already have celiac disease, can prevent symptoms-and damage of small intestine-by eating a gluten-free diet. Celiac Disease – Eating a Gluten-Free Diet. Some adults with celiac disease have a poorly functioning or nonfunctional spleen, which is a risk factor for developing a pneumococcal infection. For this reason, Doctor may recommend that patient get immunized with the pneumococcal vaccine.