The leukocytes are also called white blood corpuscles (WBC) and formally known as white cells of the blood but these are not white colour, these are colourless. The white blood cells are protect our body against any diseases by fighting with infections (bacterial, viral, protozoan, parasitic etc.), antigens and also against malignancy. These are two types; Granulocytes (Neutrophil, Eosinophil and Basophile) and Agranulocytes (Monocyte and Lymphocyte). After staining the blood film with Leishman stain, the blood smear examine in the microscope under oil immersion objective (100X). Under oil immersion objective the leukocytes are seen as follows:

Differential Leukocyte Count is useful to identify changes in the distribution of white blood cells which may be related to specific type of disorders. It also gives idea regarding the severity of the disease and the degree of response of the body.

Neutrophils are round shape, 10 – 15µ in diameter. The cell contains cytoplasm and nucleus. The nucleus shows variable numbers of lobes, 2 – 7 lobes hence called polymorphonuclear leukocytes. The nucleus stain purple blue and the chromatin are coarse and ropy. The cytoplasm contains two types of granules – Primary granules and Secondary granules. When the cell stained with Leishman stain, only secondary granules are stained and these are violet colour granules, which are amphophilic. The cytoplasm takes pink colour.

Neutrophils are called first line defenses as they move first to fight the invading micro-organisms (bacteria etc.). Neutrophil with their enzymatic armory are superb killers. The activated neutrophils engulf the bacteria (phagocytosis) and released different enzymes into the phagocytic vesicles, which killed the bacteria and then digest it. Increase in the percentages of neutrophils in the blood circulation is called neutrophilia and Decrease in the percentages of neutrophils below normal in the bloodstream is called neutropenia.

Decrease in the percentages of neutrophils below normal in the blood stream is called neutropenia. The common causes of neutrophilia are as follows :

Eosinophils are round shaped, 10 – 15µ in diameter. The cell contain cytoplasm packed with coarse brick red colour granules which takes acidic stain (eosin) hence called eosinophil. And the nucleus of the cell consists of 2 – 3 lobes. The nucleus stains purple blue colour and chromatin is course and ropy.

Eosinophil contains a Major Basic Protein (MBP) which damages the larvae of the parasites. There is one eosinophilic cation protein which probably neutralizes heparin anticoagulant. They have a property that prevents anaphylaxis (anti allergic action). They are motile and phagocytic. Chemotoxis is also shown by the eosinophils. Increase percentage of eosinophil present in the blood is called eosinophilia. The common causes of Eosinophilia are as follows :

Basophils are round shape, 10 – 15µ in diameter occasionally seen in the blood smear from a healthy person. The cell contain ‘bilobed’ or ‘S’ shaped nucleus stains purple blue and chromatin is coarse and ropy. The cytoplasm of the cell packed with course blue basophilic granules. On an average all granules are of equal size, which obscured the nucleus.

Basophils release the histamine resulting in immediate hypersensitivity reaction and also have role in inflammation. They contain heparin, protease and other mediators of inflammation. They are motile and phagocytic. Increase percentage of basophils present in the blood circulation is called basophilia. The causes of basophilia are as follows :

Monocytes are large, round, 10 – 20µ in diameter The cell contains a large kidney shaped, light purple blue stained nucleus and pale blue colour cytoplasm contain no granules. Some time few fine purple granules and vacuoles are seen in the cytoplasm.

The monokines secreted by monocytes stimulated T-cells, take part in inflammation, act as pyrogen and stimulate formation of acute phase proteins. They converted into macrophases and phagocytosis the microorganism, dead tissues etc. Increase percentage of monocytes present in the blood is called monocytosis. The causes of monocytosis are as follows : 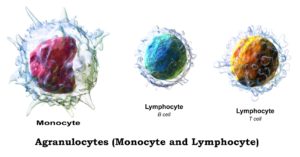 Large lymphocytes are round shaped, 10 – 18µ in diameter agranulocyte. They contain a round shaped deep blue nucleus with course and ropy chromatin and abundant clear blue cytoplasm with out any granules.

Increase in the percentages of lymphocytes in the blood is called lymphocytosis and the causes are as follows ::

Decrease in lymphocytes below normal in the blood is called lymphocytopenia and the causes are as follows ::

The polychromic staining solution (Leishman stain) contains methylene blue and eosin. These basic and acidic dyes induce multiple colors when applied to cells. Methanol acts a fixative and also as a solvent. The fixative does not make them adhere to the glass slide. The basic components of white blood cells (cytoplasm) are stained by acidic dye and they are describing as eosinophilic or acidophilic. The acidic components (nucleus & nucleic acid) of the cells take blue to purple shades by basic dye and they are called basophilic. The neutral components of the cell are stained by the dyes. 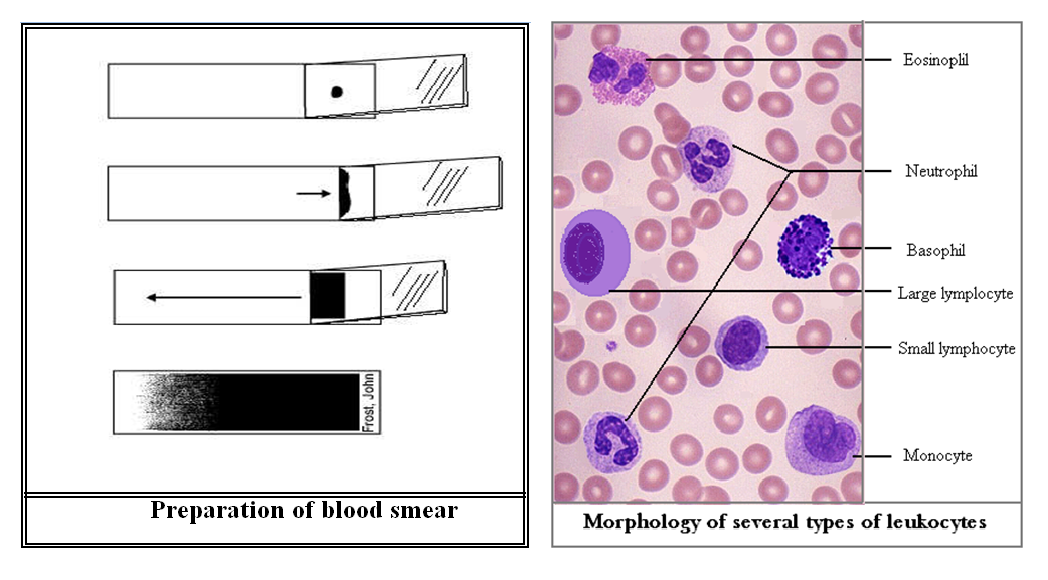 Preparation of stain : 0.15 gm of Leishman powder is dissolved in 100 ml of Acetone free methanol and the mixture is warmed at 50°C for 15 minutes. It is then filtrated and dye is ripened by keeping the filtrate in incubator at 37°C for 7 days. The stain is routinely used for staining the blood smear.