Aplastic anemia is a syndrome of bone marrow failure characterized by peripheral pancytopenia (deficiency of all three cellular components of the blood – red cells, white cells and platelets) and bone marrow hypoplasia (stem cell present in the bone marrow fails to produce sufficient numbers of blood cells in the body). Aplastic anemia is a rare but serious noncancerous disorder in which the bone marrow is unable to produce adequate quantity blood cells required for survival. It is estimated that the incidence of aplastic anemia is 0.7-4.1 cases per million people worldwide, with the prevalence between men and women being approximately equal. The incidence rate of aplastic anemia in Asia is 2-3 times higher than it is in the West; the incidence in the United States is 300-900 cases per year. It occurs most frequently in people in their teens and twenties but is also common among the elderly. 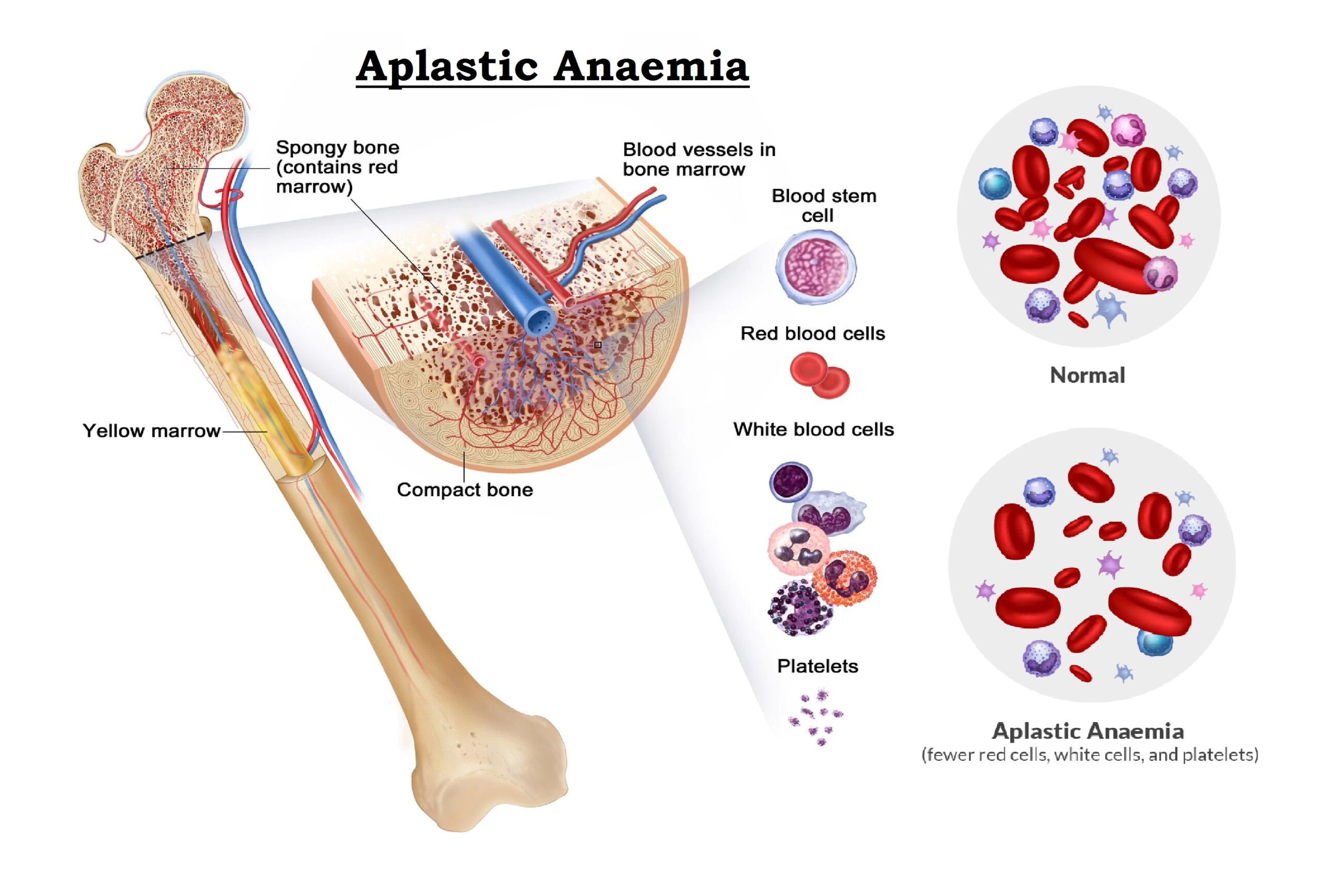 The signs and symptoms of aplastic anaemia vary from person to person and on the severity of the cell count deficiency. Problems tend to develop slowly, often over a number of years. Because of acquired aplastic anaemia develops slowly, person may not notice symptoms of the disease for months or even years and many of these symptoms, especially fatigue, Weakness, Headaches and Dizziness, are common and do not necessarily mean person have a bone marrow problem. Aplastic anaemia may not cause noticeable symptoms in the early stages if it not treat properly in early stage than it can cause a number of health problems, such as Tiredness, Shortness of breath, Dizziness, Pale skin, Chest pain, Irregular heartbeat, Heart failure, Chronic infection, Easy bruising and bleeding, Nosebleeds etc. Some common signs and symptoms of aplastic anaemia may include:

Aplastic anemia is a rare but serious noncancerous disorder in which the bone marrow is unable to produce adequate quantity blood cells required for survival. Because of acquired aplastic anaemia develops slowly, person may not notice symptoms of the disease for months or even years. 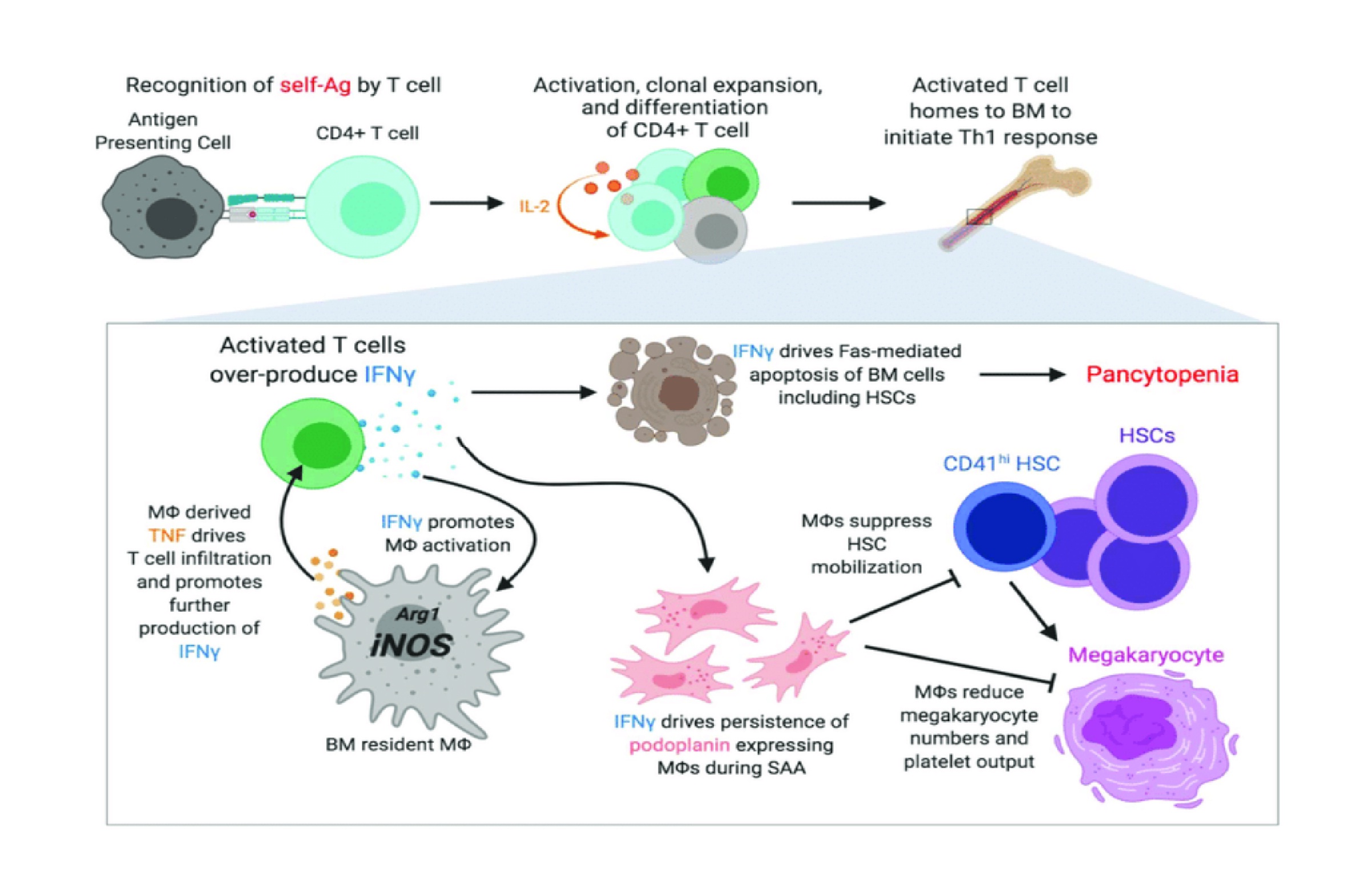 However, in many instances about 75% the underlying cause for the disease is unknown called idiopathic aplastic anemia.

In the early stage of diagnosis, it’s complicated to differentiated Aplastic anemia and pure Red cell aplasia. In aplastic anemia, the patient has pancytopenia (i.e., also leukopenia and thrombocytopenia) resulting in a decrease of all formed elements. In contrast, pure red cell aplasia is characterized by a reduction in red cells only. The diagnosis can only be confirmed with a bone marrow examination. Before Bone marrow examination, a patient will generally have had other blood tests to find diagnostic clues, including a complete blood count, renal function test and serum electrolytes analysis, liver function test specially enzymes, thyroid function tests, vitamin-B12 and folic acid levels. Tests that may aid in determining an etiology for aplastic anemia include:

Treatments for aplastic anemia, which will depend on the severity of condition and age of the patient, might include observation, blood transfusions, medications, or bone marrow transplantation. Most people with aplastic anemia will need a blood transfusion at some point. If blood cell count is very low, doctor may suggest a bone marrow or stem cell transplant to boost body’s ability to make blood cells. The treatment will be based on how severe the anemia is and what is causing it. Treatments can include:

The procedure requires a lengthy hospital stay. After the transplant, patient will receive drugs to help prevent rejection of the donated stem cells. A stem cell transplant carries risks. Patient body may reject the transplant, leading to life-threatening complications. Patients under age 40 are the best candidates. Cure rates decline significantly in those over 40.

Although there is no limit to the number of blood transfusions a person can undergo, repeated transfusions might lead to complications such as:

There’s no prevention for most cases of aplastic anemia. Avoiding exposure to radiation, insecticides, herbicides, organic solvents, paint removers and other toxic chemicals might lower risk of the disease.