Skip to content
Infectious mononucleosis (IM) is a viral syndrome resulting from an acute infection with Epstein-Barr virus (EBV), commonly known as, Mono or Glandular fever or Kissing disease. Mononucleosis typically occurs between early childhood and early adulthood and is ordinarily self-limiting as the patient develops EBV-specific immunity. However, in some cases Infectious mononucleosis can causes severe complications.
The most common cause of mononucleosis is the Epstein-Barr virus, but other viruses can also cause this disease. Mononucleosis usually isn’t very serious. Most adults have been exposed to the Epstein-Barr virus and have built up antibodies. They’re immune and won’t get mononucleosis again.
Most people are infected by the virus as children, when the disease produces little or no symptoms. In young adults, the disease often results in fever, sore throat, enlarged lymph nodes in the neck and feeling tired. Most people get better in two to four weeks; however, feeling tired may last for months. The liver or spleen may also become swollen. In less than one percent of cases splenic rupture may occur.

Worldwide, the EBV may be present in 95% of adults between 35 and 40 years. In patients previously infected during early adulthood, the EBV remains dormant in the B-lymphocytes, and those affected may continue to carry asymptomatic infection lifelong. Infectious mononucleosis antibodies may be present in 90% to 95% of the population. However, epidemiologic data regarding infection vary among age-groups and by geographic location. Infectious mononucleosis occurring in patients between ages 1 and 5 years is very limited in industrialized countries and within higher socioeconomic groups; in these settings, infection onset occurs primarily in the second decade of life. EBV is rarely found in patients younger than 1 year, possibly because of serologic protection from maternal antibodies. Early childhood infection with EBV is predominantly found in the developing countries and in lower socioeconomic groups. EBV infection in young children usually presents with nonspecific symptoms. Wherever improvements in hygiene have been made during recent years, EBV infection in early childhood has become increasingly rare.
Susceptibility to EBV becomes more pronounced during adolescence and early adulthood; in the United States, the incidence of Infectious mononucleosis is 500 cases per 100,000 persons per year, with persons between ages 15 and 24 accounting for the greatest incidence. Among college freshmen who are initially seronegative for EBV (estimates range from 30% to 70%), between 10% and 20% will become infected with the virus; of these, 30% to 50% will develop Infectious mononucleosis. Infectious mononucleosis is not seasonal or cyclical and has no sexual predisposition.

About 90% of cases of infectious mononucleosis are caused by the Epstein–Barr virus (EBV), a member of the Herpesviridae family of DNA viruses. It is one of the most commonly found viruses throughout the world. Contrary to common belief, the Epstein–Barr virus is not highly contagious. It can only be contracted through direct contact with an infected person’s saliva, such as through kissing or sharing toothbrushes.
A minority of cases of infectious mononucleosis is caused by human Cytomegalovirus (CMV), another type of herpes virus. This virus is found in body fluids including saliva, urine, blood, and tears. A person becomes infected with this virus by direct contact with infected body fluids. Cytomegalovirus is most commonly transmitted through kissing and sexual intercourse. It can also be transferred from an infected mother to her unborn child. This virus is often “silent” because the signs and symptoms cannot be felt by the person infected. However, it can cause life-threatening illness in infants, people with HIV, transplant recipients and those with weak immune systems. For those with weak immune systems, cytomegalovirus can cause more serious illnesses such as pneumonia and inflammations of the retina, esophagus, liver, large intestine, and brain. Approximately 90% of the human population has been infected with cytomegalovirus by the time they reach adulthood, but most are unaware of the infection. Once a person becomes infected with cytomegalovirus, the virus stays in his/her body fluids throughout the person’s lifetime.
Epstein–Barr virus (EBV) and Cytomegalovirus (CMV) infection both are spread via saliva, and has an incubation period of four to seven weeks. The length of time that an individual remains contagious is unclear, but the chances of passing the illness to someone else may be the highest during the first six weeks following infection. Some studies indicate that a person can spread the infection for many months, possibly up to a year and a half.

Epstein-Barr virus (EBV), a gamma herpes virus, is spread via intimate contact from persons recently infected with EBV infection to other susceptible humans. EBV is typically transmitted through oropharyngeal secretions, mainly saliva. After its transmission, the Epstein-Barr virus enters epithelial B-lymphocytes, which contain receptors for EBV. Infected B-lymphocytes target the salivary glands, lymphoid cells and the oropharynx; causing pharyngitis and other early manifestations of Infectious Mononucleosis . After infection, the host immune response is an activation of T cells against infected B cells, producing larger, atypical lymphocytes called Downey cells.
The infected B cells then enter the blood stream, carrying the virus throughout the body to the spleen, liver and peripheral lymph nodes. The spread of these infected lymphocytes elicits a significant cellular immunologic response to the viral infection. This immunologic response is largely responsible for the clinical presentation of Infectious mononucleosis in the lymph nodes, spleen and possibly the liver. 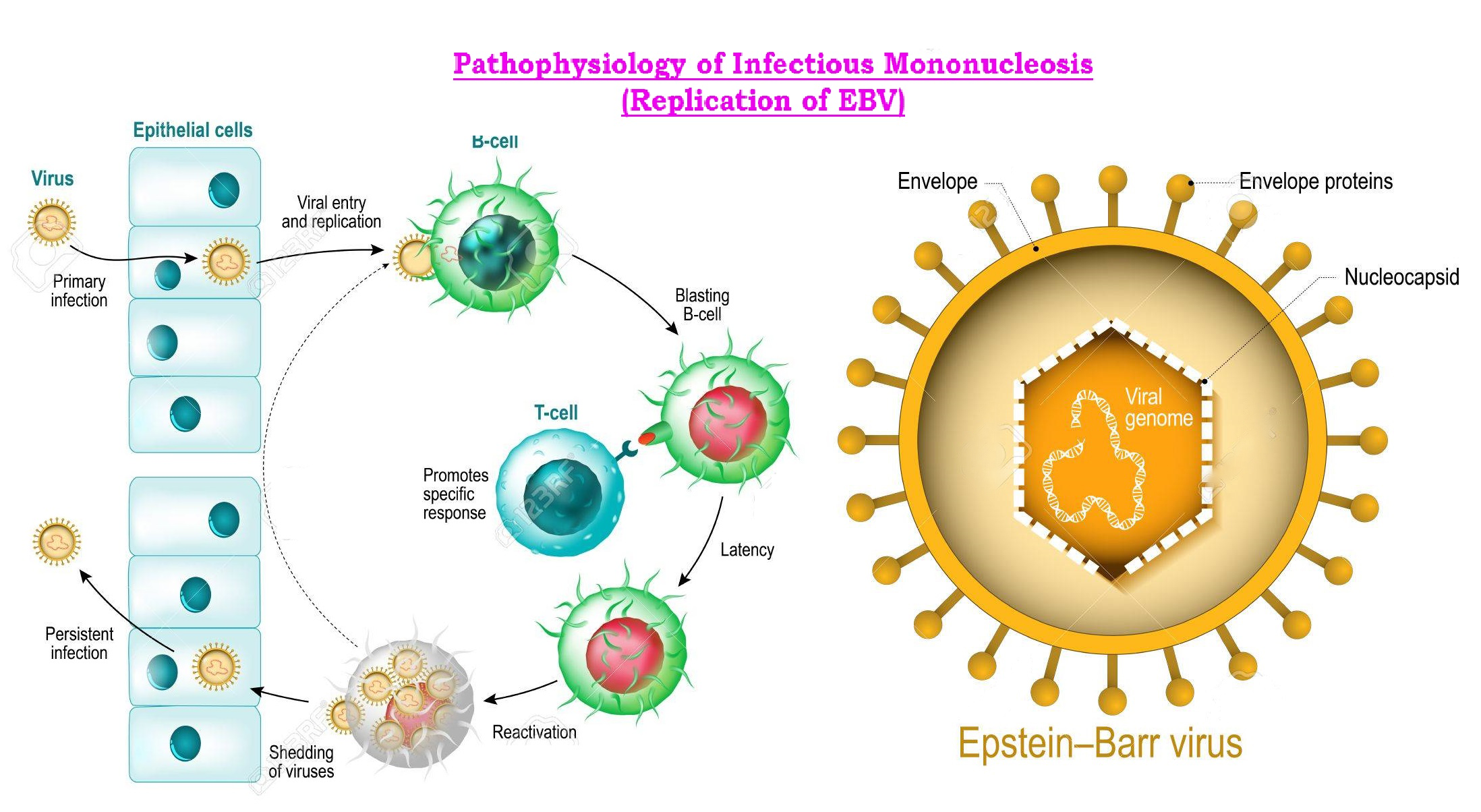 Once acute infection occurs, antibodies are produced against both EBV and unrelated viral species. Recent-onset infection produces heterophile antibodies, the presence of which is helpful in the diagnosis of Infectious mononucleosis. Specific antibodies to the EBV also develop, including immunoglobulin G (IgG) and IgM; these and others can be useful for serological identification of EBV. Once an individual is acutely infected with EBV, he or she becomes a lifelong carrier of the virus.
The incubation period of the Epstein-Barr virus (EBV) is between 30 and 50 days, making it difficult to pinpoint an exact date of exposure. Transmission of the virus to others may be possible for three months or longer; even after symptoms are resolved, the virus is shed in the saliva for months. Additionally, the EBV has been found in semen and cervical secretions, indicating the possibility of sexual transmission.

Patients with Infectious mononucleosis usually seek medical treatment for worsening sore throat and increasing fever. The clinical presentation of Infectious mononucleosis can vary, depending on time between symptom onset and that of presentation. However, the triad of most common clinical symptoms, which ordinarily resolve in one to three weeks are sore throat, fever, and lymphadenopathy. During the one- or two-week-long prodromal period, patients may also have nonspecific symptoms of malaise, fatigue and myalgia. About half of patients report headache. The incubation period of the virus is the time between when the patient contract the infection and when he/she start to have symptoms. It lasts four to six weeks. The signs and symptoms of Infectious mononucleosis typically last for one to two months.
The symptoms may include: 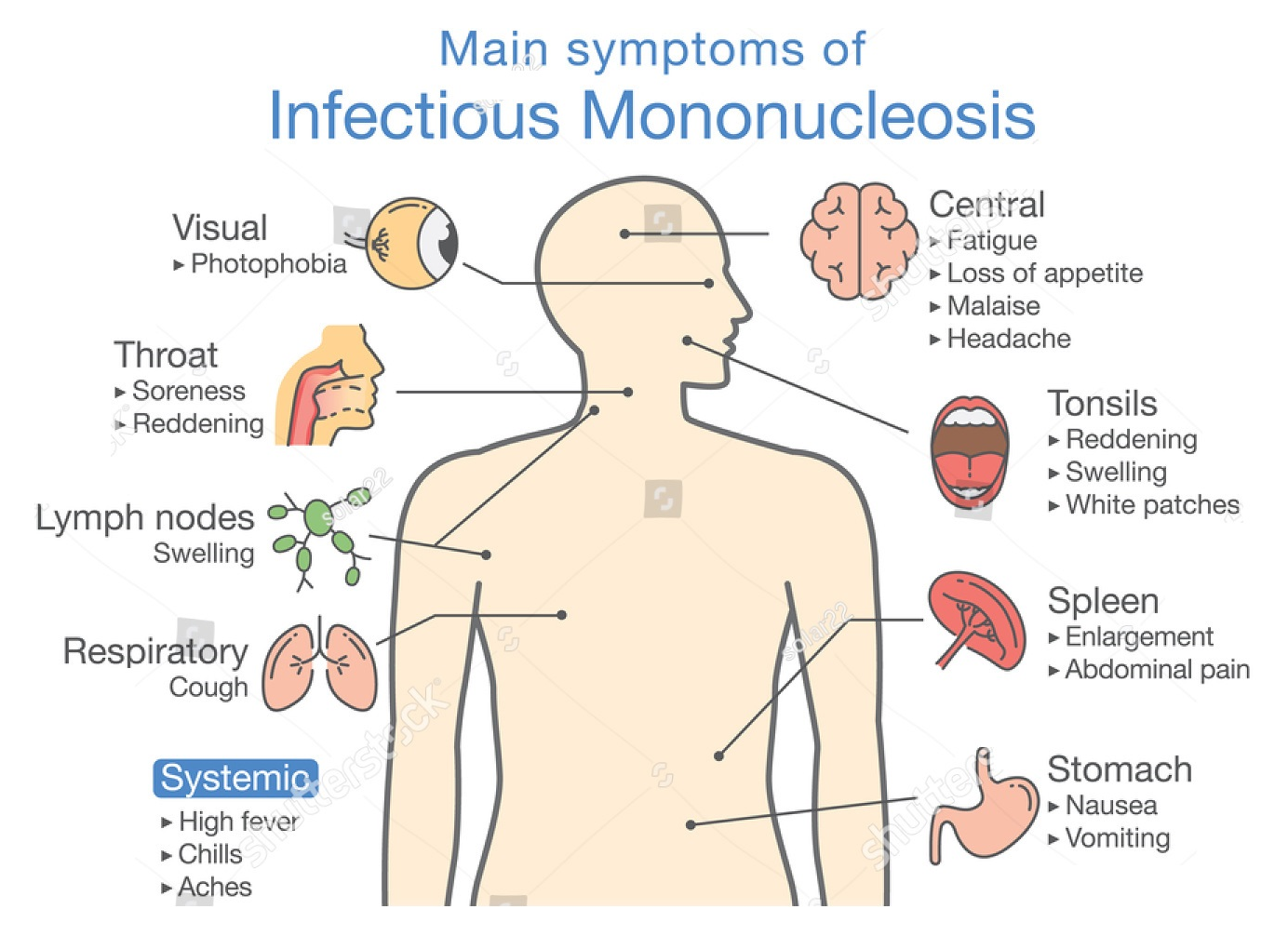 Occasionally, spleen or liver may also swell, but mononucleosis is rarely ever fatal. Infectious mononucleosis is hard to distinguish from other common viruses such as the flu and Streptococcal infection. If the patient’s symptoms don’t improve after one or two weeks of home treatment such as resting, getting enough fluids and eating healthy foods; Consult with doctor.

Physician may suspect Infectious mononucleosis based on the signs & symptoms (such as fever and sore throat etc.); how long they’ve lasted, medical history (as close contact with other people with infectious mononucleosis) and a physical examination (including palpation of any enlarged lymph nodes, tonsils in the neck or enlarged liver or spleen and petechiae in the palate etc.).

Complications of mononucleosis may be more serious than the disease itself.

Infectious mononucleosis can also result in the following less common complications like anaemia, thrombocytopenia, Heart problems; an inflammation of the heart muscle (myocarditis), Complications involving the nervous system – meningitis, encephalitis & Guillain-Barre syndrome and Swollen tonsils; which can block breathing. The Epstein-Barr virus (EBV) can cause much more serious illness in people who have impaired immune systems, such as people with HIV/AIDS or people taking drugs to suppress immunity after an organ transplant.

Treatment mainly involves bed rest, good nutrition and drinking plenty of fluids. Treating secondary infections; occasionally, a streptococcal (strep) infection accompanies the sore throat of mononucleosis. Patient may also develop a sinus infection or an infection of tonsils (tonsillitis). If so, he/she may need treatment with antibiotics for these accompanying bacterial infections.

Infectious mononucleosis is almost impossible to prevent. This is because healthy people who have been infected with EBV in the past can carry and spread the infection periodically for the rest of their lives. Almost all adults have been infected with EBV by age 35 and have built up antibodies to fight the infection. People normally get Infectious mononucleosis only once in their lives.
Epstein–Barr virus infection is spread via saliva and has an incubation period of four to seven weeks. The length of time that an individual remains contagious is unclear, but the chances of passing the illness to someone else may be the highest during the first six weeks following infection. Some studies indicate that a person can spread the infection for many months, possibly up to a year and a half. If the persons are infected then he/she can help prevent spreading the virus to others by not kissing them and by not sharing food, dishes, glasses and utensils until several days after fever has subsided and even longer, if possible. The Epstein-Barr virus may persist in saliva for months after the infection. No vaccine exists to prevent mononucleosis.
Share It