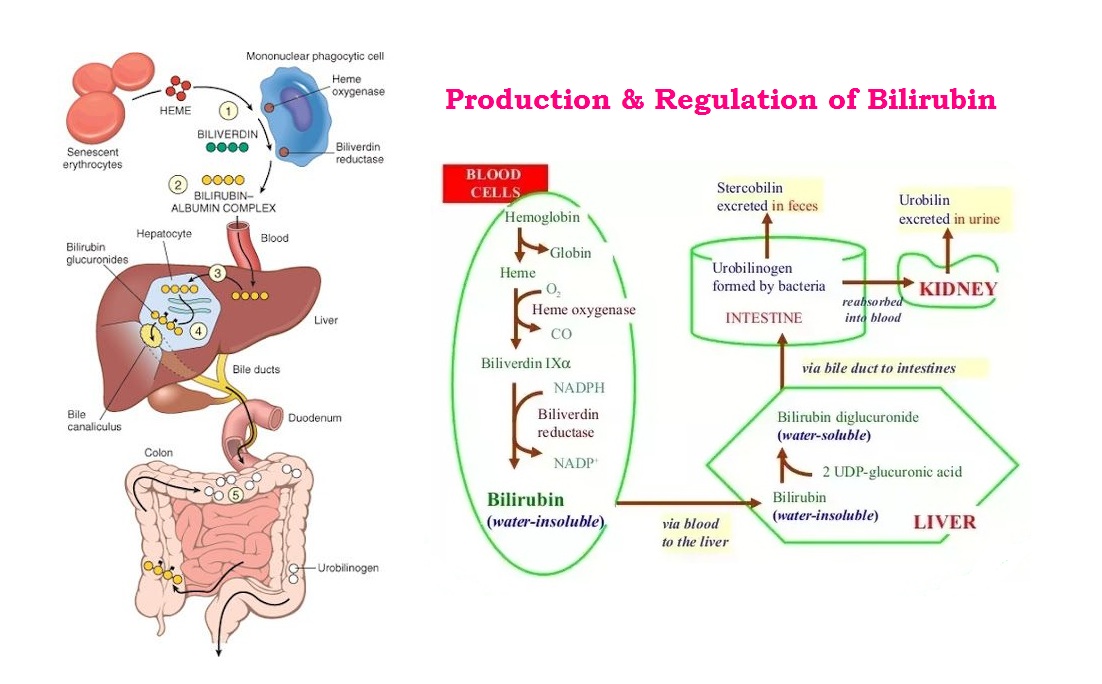 The liver plays the central role in the further disposal of the bilirubin. The indirect bilirubin bound to serum albumin gets transported through the blood to the liver. The free unconjugated bilirubin or indirect bilirubin is insoluble in water, cannot be filtered through the glomerulus. In the liver, bilirubin is removed by parenchymal cells. One molecule of albumin can bind 2 molecules of bilirubin. 100 ml of plasma can transport upto 25 mg of bilirubin. It is converted to water soluble conjugated bilirubin or direct bilirubin by the action of enzyme glucuronyl transferase, by conjugation with glucuronic acid. Drugs like primaquine, novobiocin, chloram-phenicol, androgens and pregnanediol may interfere in this conjugation process and may cause jaundice. This, conjugated bilirubin is excited by the liver through the bile duct and into the duodenum. In  the intestine, bilirubin is converted by bacterial enzymes to several related compounds, collectively called as urobilinogen. Most of urobilinogen is lost in feces as stercobilinogen; after exposure to air as strecobilin. Urobilinogen and Stercobilinogen are both colourless compounds but are oxidised to coloured products, urobilin or stercobilin respectively by atmospheric oxidation. Urobilin is present in both the specimen, urin as well as in feces. About 10 to 15% of urobilinogen is reabsorbed into the blood stream and returns to liver by portalblood.  Conjugated bilirubin is not bound to protein, it is easily filtered through the glomerulus and reexcreted in the intestine and through the kidney as a composition of urine. Excretion rate is 1 to 4 mg in 24 hrs., freshly collected normal urine usually gives positive reaction urobilinogen. Normally very small concentration 0.2-0.4 mg/dl of conjugated bilirubin is present in blood due to regurgitation, back from the bileduct.

The estimation of direct and indirect bilirubin may help in the differential diagnosis of various types of jaundice; pre-hepatic, hepatic and post-hepatic.

The most commonly occurring form of unconjugated hyperbilirubinemia is seen in Neonates.  Normally newborns have serum unconjugated bilirubin concentrations greater than the healthy normal adults population. About 50% of the newborn population is clinically jaundiced during the first 5 days of life. In the normal fullterm neonate, unconjugated bilirubin levels raise upto 4-5 mg/dl and some time it’s goes upto 10 mg/dl within 48 hours afterwards decrease to normal levels in 7 to 10 days. This temporary increase of unconjugated bilirubin is caused by an increase bilirubin production as a result of haemolysis of erythrocytes and incomplete mutation of bilirubin metabolism and excretion. If the unconjugated bilirubin level exceeds 17 – 20 mg/dl in fullterm infant, there is a risk of Kernicterus (serum bilirubin enter the brain through crossing blood brain barrier & damage of brain). Infant with neonatal jaundice treated by applying Phototherapy (colour light application), which works by converting the water insoluble unconjugated bilirubin  to water soluble cis-bilirubin isomer (Trans-bilirubin conversation). The principle of phototherapy is based on an application of  a specific frequency of blue light. The light can be applied on the baby’s body surface with a overhead lamps but the baby’s eyes need to be covered  by a Biliblanket, which placed under the baby’s cloth.

The most widely used methods for the determination of bilirubin  are based on the diazo reaction, which was described by Ehrlich in 1883. In diazo reaction, diazotized sulfanilic acid (diazo reagent) reacts with bilirubin to produce reddish purple at natural pH  and blue colour  at low or high pH values due to formation of two azodipyrroles. In 1916, Van den Bergh and Muller applied this reaction for the quantitative determination of serum bilirubin . They found out that  alcohol accelerated the diazo reaction of unconjugated bilirubin . This investigation describe that the bilirubin reacts with diazo reagent to produce coloured azo pigment. At acidic pH (pH 5), the pigment is purple in colour and the  conjugated bilirubin being water soluble gives the colour immediately; hence called direct  reaction. Whereas unconjugated bilirubin requires an accelerator or solubilizer, such as alcohol and it has to be extracted first with alcohol afterwards the reaction becomes positive; hence called indirect reaction.  Total bilirubin is the added value of both conjugated and Unconjugated bilirubins.

Although Serum is preferred for enzymatic assay, heparinized plasma can also be used (free from haemolysis). The serum  specimen for  bilirubin determination should be used immediately as far as possible on the same day, if not tested immediately store the specimen in an amber coloured bottle at 2-8°C for not more than 24 hours. Gross  contamination at any stage makes the specimen unsuitable for bilirubin determination. The samples should be brought  to room temperature before use. No prior patient preparation is needed.

Zulu
Systemic Lupus Erythematosus (SLE) : Causes & Risk Factors, Sign & Symptoms, Complication, Diagnosis, Treatment and PreventionSystemic Lupus Erythematosus (SLE) is an autoimmune disease characterized by acute and chronic inflammation of various tissues of the body. It's also known to as Disseminated lupus erythematosus or LE syndrome or Libman-Sacks disease or Lupus. Aut...( read more )
Infectious mononucleosis : Causes & Mode of Transmission, Pathophysiology, Sign & Symptoms, Diagnosis, Complications, Treatment & PreventionInfectious mononucleosis (IM) is a viral syndrome resulting from an acute infection with Epstein-Barr virus (EBV), commonly known as, Mono or Glandular fever or Kissing disease. Mononucleosis typically occurs between early childhood and early adul...( read more )
Arthritis : Sign & Symptoms, Causes, Risk factors, Diagnosis, Complications, Treatment & PreventionArthritis (arthro = joint, itis = inflammation) is a inflammatory disease characterized by swelling, stiffness and pain in the one or more joints in the body. Specific symptoms vary depending on the type of arthritis, but usually include joint pain...( read more )
Hantavirus Infection : Sign & Symptoms, Transmission, Diagnosis, Treatment and PreventionHantaviruses are a family of viruses spread mainly by rodents and can cause varied disease syndromes in people worldwide. Hantaviruses are RNA viruses transmitted to humans by rodents (rodent-borne). Infection with any hantavirus can produce hantav...( read more )
Novel Coronavirus (COVID-19) Infection : Sign & Symptoms, Transmission, Risk factors, Diagnosis, Complication, Treatment and Prevention2019 Novel Coronavirus (2019-nCoV) is a virus (more specifically, a coronavirus) identified as the cause of an outbreak of respiratory illness first detected in Wuhan, China. Early on, many of the patients in the outbreak in Wuhan, China reportedly...( read more )
Adenosine Deaminase (ADA) : About, Significance, Reference value, Determination & Interpretation Adenosine Deaminase (ADA) is an endogenous tissue enzyme widely distributed in mammalian tissues, particularly in T lymphocytes. It is released into the serum of the patients with different types of malignancies and infections. It is associated...( read more )
Influenza (Flu) : Sign & Symptoms, Transmission, Diagnosis, Treatment and PreventionInfluenza is an infectious disease caused by an influenza virus. It's commonly known as "Flu". Symptoms of the Influenza can be mild to severe and even death. The most common symptoms includes a high fever, runny nose, sore throat, muscle pains, h...( read more )
Determination of Clotting Time (CT)               The Clotting Time is the time taken by blood to coagulate outside the body. It depends on many factors involved in coagulation. There are two methods applied for the determination of Clotting time – Venipuncture method (Lee...( read more )
Determination of Bleeding Time (BT)               Bleeding Time (BT) is the time by which bleeding stops from an injury site. Determination of Bleeding Time recognizes vascular defect and platelet disorder. Two methods are used for determination of BT - “Duke Method”, a...( read more )
Determination of Osmotic Fragility of ErythrocytesThe red blood cell membrane restricts the solutes and allows only water to pass through them (osmosis). If the cells are placed in hypertonic solution (concentrated sodium chloride solution, concentration more then normal that is > 2.0%), these...( read more )