Hantaviruses are a family of viruses spread mainly by rodents and can cause varied disease syndromes in people worldwide. Hantaviruses are RNA viruses transmitted to humans by rodents (rodent-borne). Infection with any hantavirus can produce hantavirus disease in people. Hantaviruses in the Americas are known as “New World” hantaviruses and may cause Hantavirus Pulmonary Syndrome (HPS); is a disease identified in the late stage of infection with a hantavirus subtype. Other hantaviruses, known as “Old World”, hantaviruses, are found mostly in Europe and Asia and may cause Hemorrhagic Fever with Renal Syndrome (HFRS). Each hantavirus serotype has a specific rodent host species and is spread to people via aerosolized virus that is shed in urine, feces, saliva and less frequently by a bite from an infected host. The most important Hantavirus in the United States that can cause HPS is the Sin Nombre virus; spread by the deer mouse. 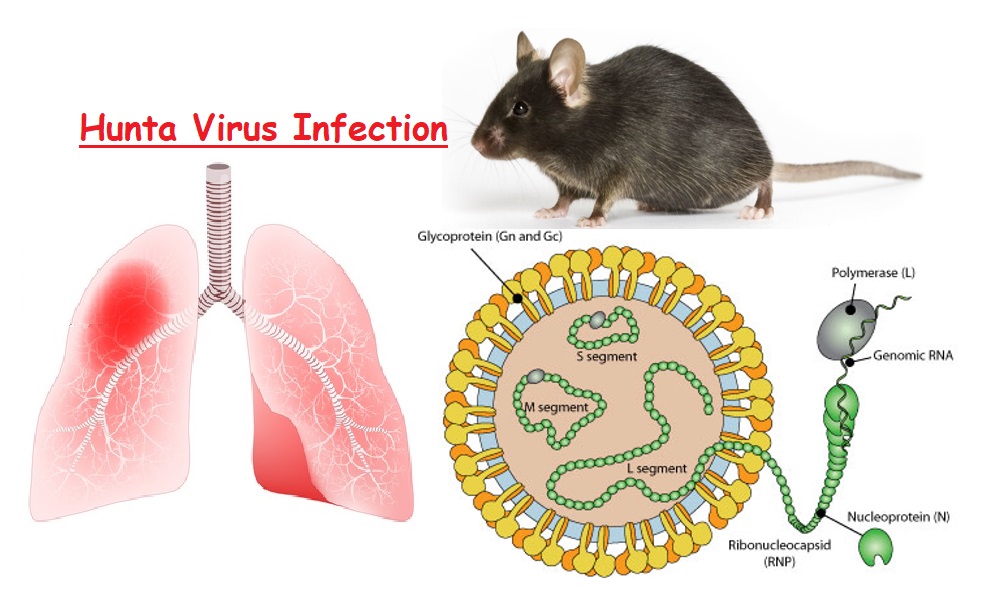 In the past century, two major outbreaks of disease led to the discovery of Hantaviruses in the Old and New Worlds. The first outbreak occurred during the Korean War (1950 to 1953), wherein more than 3,000 United Nations troops fell ill with Korean hemorrhagic fever, which is commonly referred to as hemorrhagic fever with renal syndrome (HFRS). The second outbreak of disease occurred in the Four Corners region of the United States in 1993 and was initially referred to as Four Corners disease, which is now called Hantavirus Pulmonary Syndrome (HPS) or Hantavirus Cardiopulmonary Syndrome (HCPS). These viruses can cause serious diseases in humans and have reached mortality rates of 12% (HFRS) and 60%(HPS) in some outbreaks.
Infection was associated with fever, hypotension, renal failure, thrombocytopenia and Disseminated Intravascular Coagulation (DIC). The clinical syndrome became known as hemorrhagic fever with renal syndrome (HFRS), formerly Korean hemorrhagic fever and the virus was named Hanta after the Hantaan River of Korea. Over the ensuing years, several other etiologic agents of HFRS such as the Seoul, Puumala, and Dobrava viruses, were discovered across Europe and Asia.

Early symptoms of infection can cause diagnostic confusion. In 2018, Kiley Lane, a 27-year-old mother who lived in New Mexico, was diagnosed as having the flu but her symptoms got worse. She was diagnosed with having Hantavirus infection about a month after her flu diagnosis and died about one month later of the disease. Symptoms of the Hantavirus Pulmonary Syndrome are fever, headaches, muscle aches, stomach problems, dizziness and chills. Late Symptoms can be lungs filling with fluid and shortness of breath.
Early Symptoms :
Early symptoms include fever, headaches, gastric problem, fatigue & muscle aches, especially in the large muscle groups—thighs, hips, back and sometimes shoulders. These symptoms are universal.
There may also be headaches, dizziness, chills and abdominal problems, such as nausea, vomiting, diarrhoea and abdominal pain. About half of all HPS patients experience these symptoms.
Late Symptoms :
Four to 10 days after the initial phase of illness, the late symptoms of HPS appear. These include coughing and shortness of breath, with the sensation of, as one survivor put it, a “…tight band around my chest and a pillow over my face” as the lungs fill with fluid. Signs and symptoms of HPS as it spreads throughout the body include:

In addition, some hantaviruses can cause Haemorrhagic fever with renal syndrome (HFRS) as the disease progresses.

Mode of transmission of Infection :

Hantavirus infection is spread to humans by particles of rodent urine, feces, saliva, and airborne particles containing these excretions. There are dozens of types of hantaviruses, majority of which do not cause disease in humans. 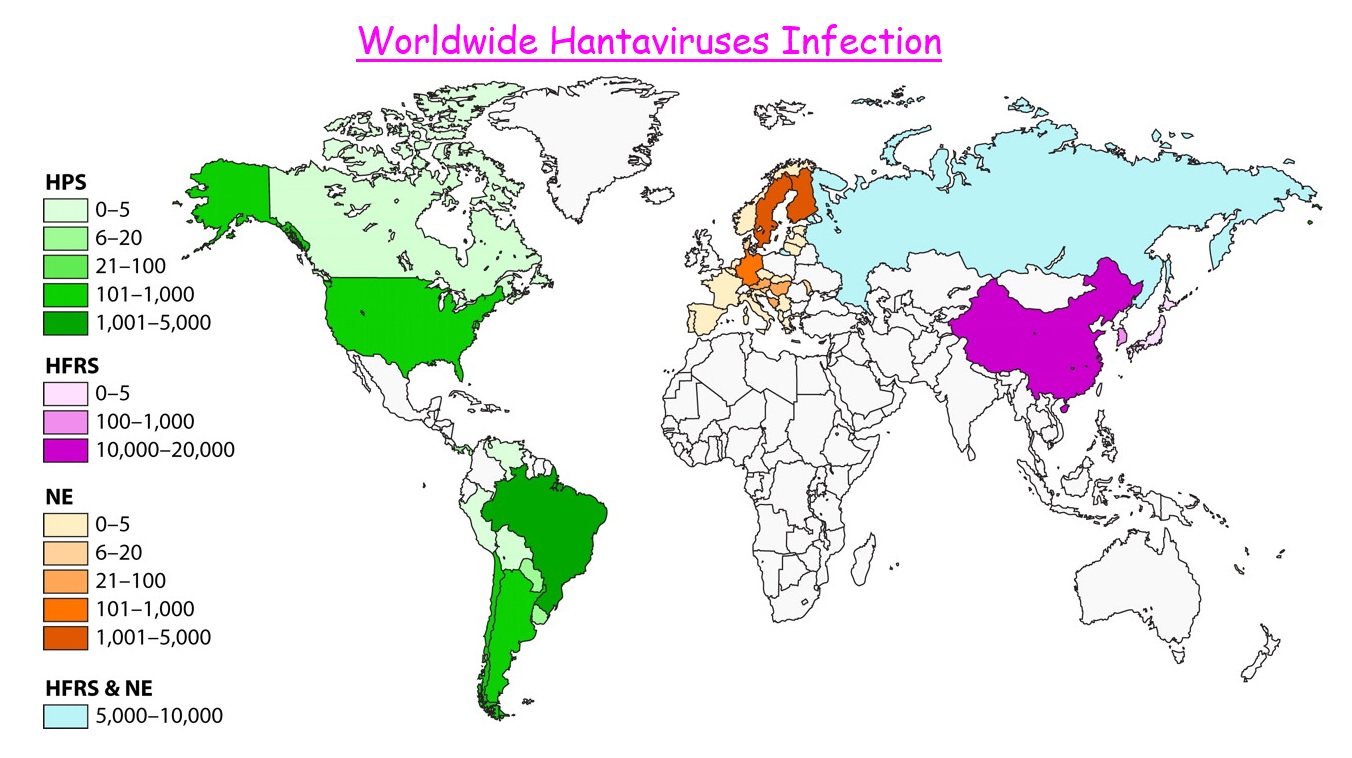 Physician usually diagnose Hantavirus infection based on the sign & symptoms of Hantavirus infection like symptoms of fever, headaches, Muscle aches, Stomach problems, Dizziness and Chills, lungs filling with fluid and shortness of breath with past history associated with rodents or probable contact with rodent-contaminated airborne dust and chest X-rays provide additional evidence but definitive diagnosis is usually done at a specialized laboratory or the U.S. Centers for Disease Control and Prevention (CDC).
The prognosis of HPS is fair to poor because currently, about 62% of patients recover, while about 38% will die. The prognosis may be better if the patient gets his/her diagnosis early and given support in an intensive care unit in a hospital. However, the early diagnosis of HPS is difficult; some patients did not know they had been exposed to rodents that carried hantavirus.

Physician usually diagnose Hantavirus infection based on Hantavirus lung symptoms are associated with rodents or probable contact with rodent-contaminated airborne dust and chest X-rays provide additional evidence but definitive diagnosis is usually done at a specialized laboratory or the U.S. Centers for Disease Control and Prevention (CDC).
There is no specific treatment, vaccine or cure for hantavirus infection. Usually, treatment is in an intensive care facility and often require respiratory support (intubation and mechanical ventilation). Special physicians usually care for people with hantavirus infections. If a person with HPS survives, there are usually no long-term complications.

The best way to prevent infection is to avoid being exposed to this virus; avoid close contact with rodents or probable contact with rodent-contaminated airborne dust. There is no specific treatment, cure or vaccine for hantavirus infection. However, we do know that if infected individuals are recognized early and receive medical care in an intensive care unit, they may do better. In intensive care, patients are intubated and given oxygen therapy to help them through the period of severe respiratory distress.
The earlier the patient is brought into intensive care, the better. If a patient is experiencing full distress, it is less likely the treatment will be effective. Therefore, if the person has been around rodents and have symptoms of fever, deep muscle aches, and severe shortness of breath; contact with his/her treating physician immediately. Be sure to tell his/her doctor that the person has been around rodents—this will alert physician to look closely for any rodent-carried disease, such as HPS.
The CDC recommends elimination or reduction of contact with any rodents (for example, at home, worksites, campsites, barns, sheds) by reducing rodent access or rodent-proofing. Sealing up gaps and holes, placing traps, and keeping areas as clean and food free as possible will help. If a person must come in contact with rodents or areas where they live, precautions such as gloves and masks may reduce the chances for infection; disinfectant treatment of possible contaminated surfaces may also help prevent the disease.
Do not attempt to use a vacuum or use a broom to remove rodent urine or feces; this action may increase the risk of HPS by generating an aerosol. The risk of HPS can be reduced by inactivating hantaviruses in the environment by using a household detergent and 1½ cups of bleach per gallon of water to wipe or spray the potentially infected area and while minimizing contact by wearing gloves and a mask. Take similar precautions with rodents caught in traps.