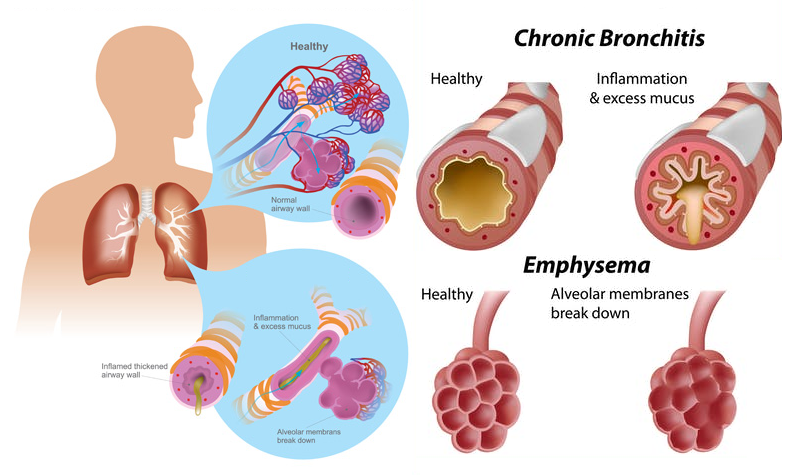 Chronic obstructive pulmonary disease (COPD) is a progressive life threatening lung disease characterized by chronic obstruction of lung airflow that interferes with normal breathing and is not fully reversible and also that causes breathlessness (initially with exertion) and predisposes to exacerbations & serious illness. The most common conditions are emphysema and chronic bronchitis. Many people with COPD have both of these conditions. Emphysema slowly destroys air sacs in your lungs, which interferes with outward air flow. Bronchitis causes inflammation and narrowing of the bronchial tubes, which allows mucus to build up.
Emphysema and chronic bronchitis are the two most common conditions that contribute to COPD. These two conditions usually occur together and can vary in severity among individuals with COPD. Chronic bronchitis is inflammation of the lining of the bronchial tubes, which carry air to and from the air sacs (alveoli) of the lungs. It's characterized by daily cough and mucus (sputum) production. Emphysema is a condition in which the alveoli at the end of the smallest air passages (bronchioles) of the lungs are destroyed as a result of damaging exposure to cigarette smoke and other irritating gases and particulate matter.
Common symptoms include breathing difficulty, cough, mucus (sputum) production and wheezing. It's typically caused by long-term exposure to irritating gases or particulate matter, most often from cigarette smoke. People with COPD are at increased risk of developing heart disease, lung cancer and a variety of other conditions. Although COPD is a progressive disease that gets worse over time, COPD is treatable but not curable. With proper management, most people with COPD can achieve good symptom control and quality of life, as well as reduced risk of other associated conditions. 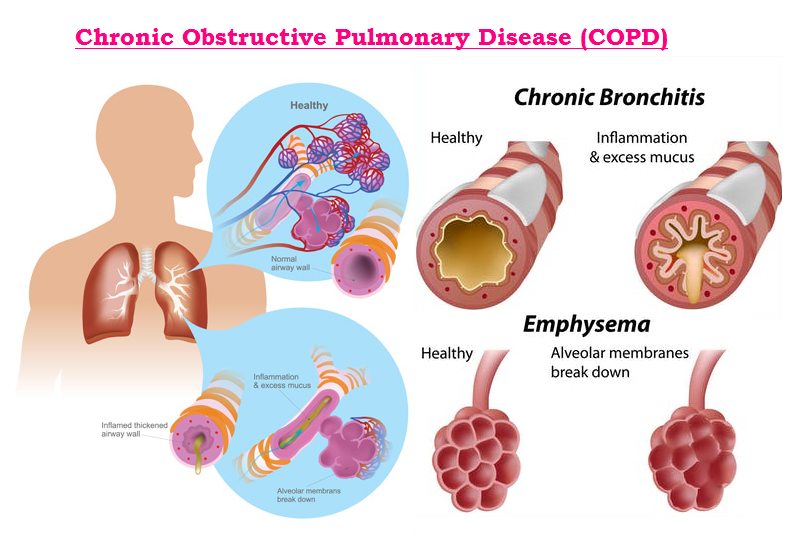 Chronic obstructive pulmonary disease (COPD) is a major cause of morbidity and mortality across the globe. According to World Health Organization estimates, 65 million people have moderate to severe COPD. More than 3 million people died of COPD in 2005 corresponding to 5% of all deaths globally and it is estimated to be the third leading cause of death by 2030. Most of the information available on COPD prevalence, morbidity and mortality comes from high-income countries. Even in those countries, accurate epidemiologic data on COPD are difficult and expensive to collect. However, it is known that low- and middle-income countries already shoulder much of the burden of COPD with almost 90% of COPD deaths taking place in these countries. In this issue of Lung India, the joint ICS/NCCP (I) consensus guidelines for the diagnosis and management of COPD have been published to facilitate the Indian practitioner in burden reduction, diagnosis and management of COPD.
In 2015, 3.2 million people died from COPD worldwide, an increase of 11.6 percent compared with 1990. During that same time period, the prevalence of COPD increased by 44.2 percent to 174.5 million individuals. In the United States, an estimated 16 million adults have COPD. However, that may be an underestimate. The American Lung Association (ALA) thinks there may be as many as 24 million American adults living with COPD. Rates of COPD are highest in the Southeast and Midwest states. In 2015, the rate was as low as 3.8 percent in only one state — Utah. In West Virginia, the highest, it was 12 percent.
COPD was the fourth-leading cause of death in the United States in 2016, following heart disease, cancer, and unintentional injuries. Worldwide, COPD was previously more common in men but the disease now affects men and women equally. In the United States, women are still 37 percent more likely to have COPD than men. More than 7 million U.S. women have COPD, and millions more are believed to have symptoms, yet haven’t been diagnosed.
Developing countries are changing fast. Socio-economic development, industrialization, urbanization, changing age structure, and changing lifestyles have the countries at a position where they are facing an ever increasing burden of Non-communicable diseases (NCD). In India NCDs were estimated to have accounted for 53% of all deaths and 44% of disability-adjusted life-years (DALYs) lost in 2005. Of these chronic respiratory disease accounted for 7% deaths and 3% DALYs lost. India also has had the ignominy of experiencing the “highest loss in potentially productive years of life” worldwide in 2005. Crude estimates suggest there are 30 million COPD patients in India. India contributes a significant and growing percentage of COPD mortality which is estimated to be amongst the highest in the world; i.e. more than 64.7 estimated age standardized death rate per 100,000 amongst both sexes. This would translate to about 556,000 in case of India (>20%) out of a world total of 2,748,000 annually. Such mammoth volumes of disease have the potential to overwhelm health systems and state economies.

Most cases of COPD are associated with long-term exposure to harmful substances by inhaling pollutants; that includes active smoking (cigarettes, pipes, cigars, etc.), and Passive smoking. Fumes, chemicals and dust found in many work environments are contributing factors for many individuals who develop COPD. Genetics factor can also play a role in an individual’s development of COPD—even if the person has never smoked or has ever been exposed to strong lung irritants in the workplace. Here is more information on the top three risk factors for developing COPD: 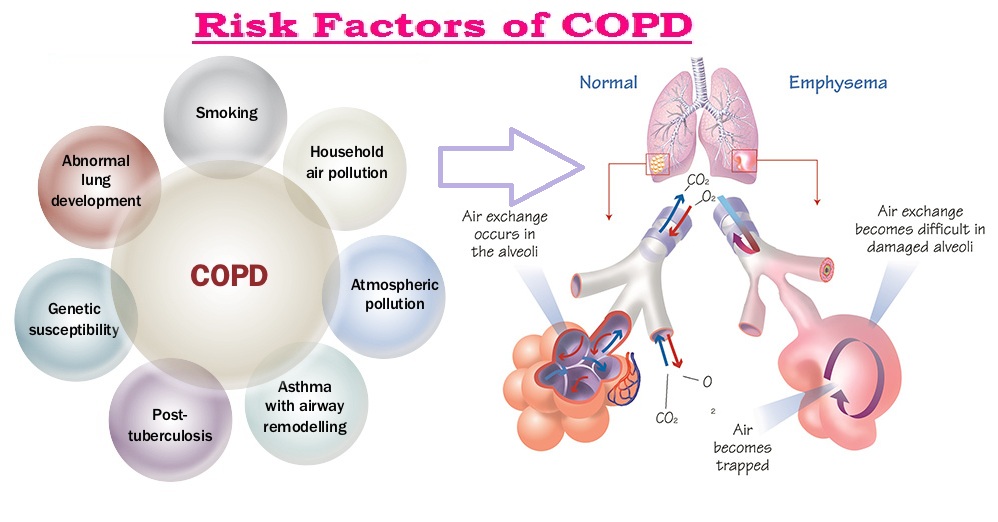 Chronic obstructive pulmonary disease (COPD) makes breathing increasingly more difficult, chronic cough and sputum production. It's develops slowly and usually becomes apparent after 40 or 50 years of age. But it develops slowly over many years and the patient may not be aware he/she have it at first. Most people with COPD do not have any noticeable symptoms until they reach their late stage. Symptoms may be mild at first, beginning with intermittent coughing and shortness of breath. As it progresses, symptoms can become more constant to where it can become increasingly difficult to breathe. Some people with COPD have acute exacerbations, which are flare-ups of severe symptoms.
Common symptoms of COPD include: 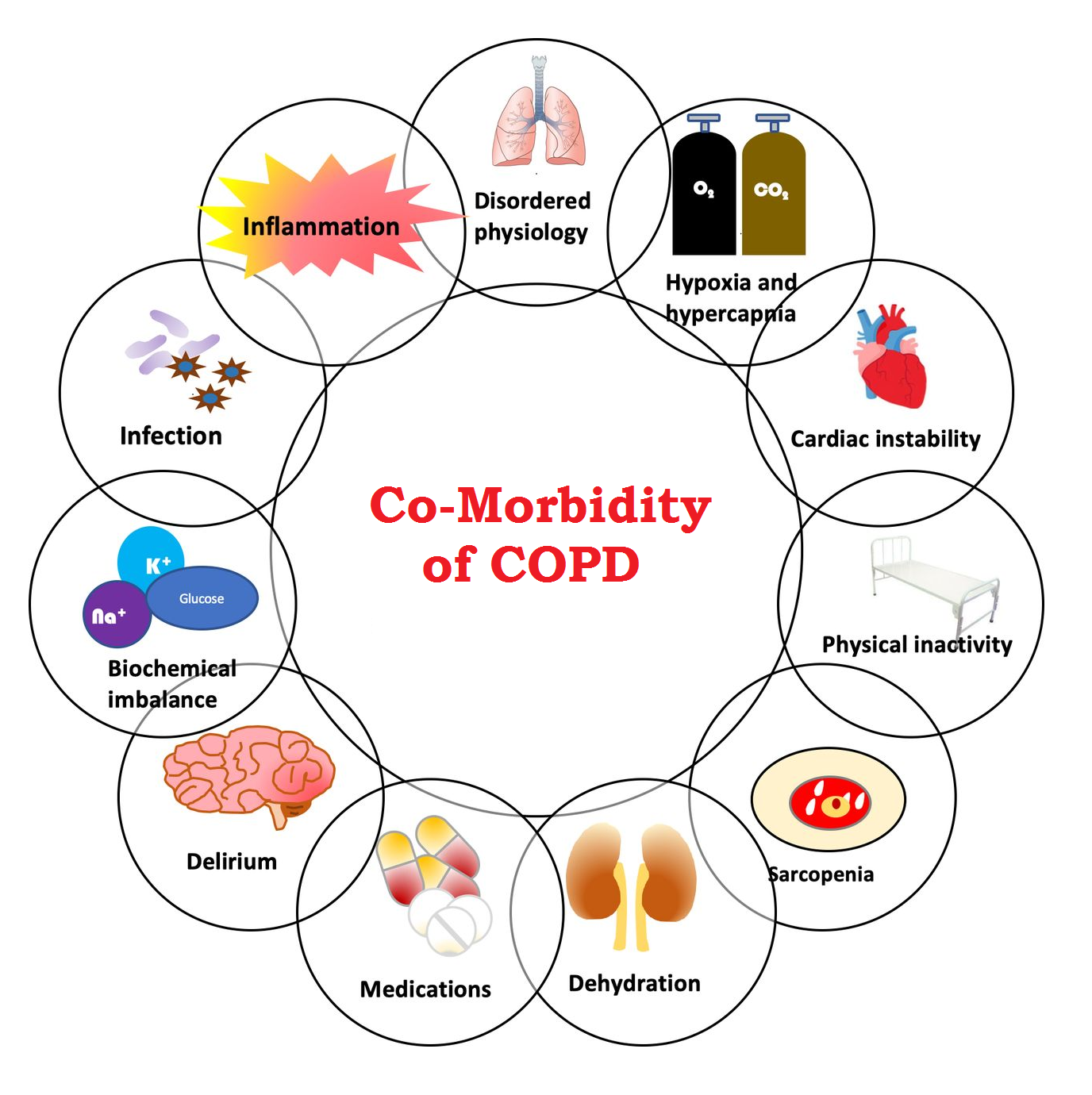 Less common symptoms of COPD include:

Chronic obstructive pulmonary disease (COPD) can cause many complications, including: 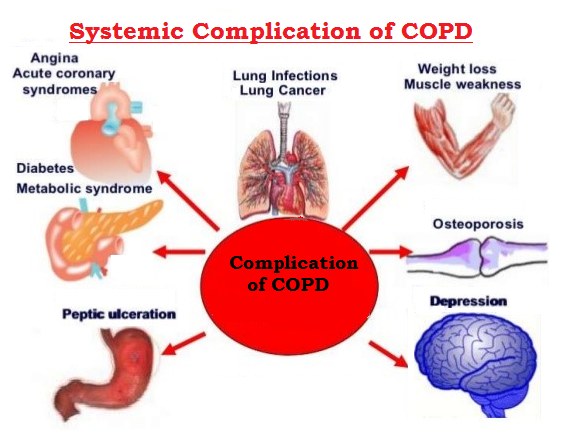 There’s no single test for the diagnosis of Chronic obstructive pulmonary disease (COPD). Diagnosis is based on symptoms, a physical exam, and diagnostic test results. During the physical exam, doctor will use a stethoscope to listen to lungs breathe. Based on all this information, doctor may order some of the following tests to get a more complete picture:

Chronic obstructive pulmonary disease is not curable. However, available medical and physical treatments can help relieve symptoms, improve exercise capacity and quality of life and reduce the risk of death. The most effective and cost-effective available treatment for COPD in people who continue to smoke is smoking cessation. Smoking cessation can slow down the progress of the disease in smokers and decrease COPD-related deaths. In some, but not all, people with COPD, treatment with inhaled corticosteroid medicines has a beneficial effect.
Much of the treatment for COPD includes things patient can do for himself. Quitting smoking is the most important thing patient can do to slow the disease and improve his/her quality of life.
The medicines used to treat COPD can be long-acting to help prevent symptoms or short-acting to help relieve them. The medications most commonly used to control COPD include:
1. Inhalers
If COPD is affecting breathing, Patient will usually be given an inhaler. This is a device that delivers medicine directly into lungs as he/she breathe in. A doctor will advise on how to use an inhaler correctly and how often to use it. There are several different types of inhaler for COPD. The main types include: 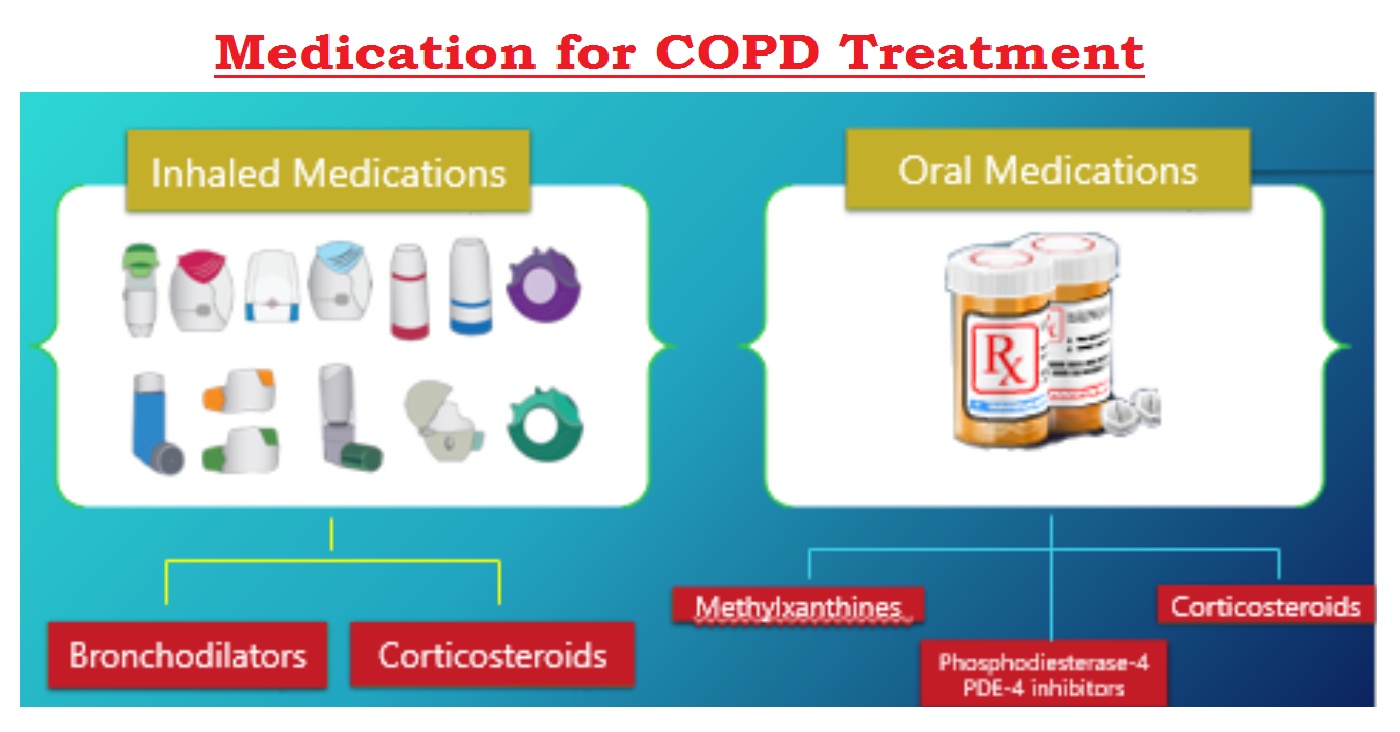 2. Tablets
If your symptoms are not controlled with inhalers, a doctor may recommend taking tablets or capsules as well.

4. Other treatments :
If patient have severe symptoms or experience a particularly bad flare-up, he/she may sometimes need additional treatment.

5. Surgery
Surgery is usually only suitable for a small number of people with severe COPD whose symptoms are not controlled with medicine. It is rarely used for COPD patients.
There are 3 main operations that can be done:

Unlike some diseases, Chronic obstructive pulmonary disease (COPD) typically has a clear cause and a clear path of prevention, and there are ways to slow the progression of the disease. The majority of cases are directly related to smoking, and the best way to prevent COPD is to never smoke — or to stop smoking now. If patient are a longtime smoker, these simple statements may not seem so simple, especially if patient have tried quitting - once, twice or many times before. But keep trying to quit. It's critical to find a tobacco cessation program that can help quit for good. It's patient best chance for reducing damage of lungs.
Occupational exposure to chemical fumes and dusts is another risk factor for COPD. If patient work with these types of lung irritants, talk to supervisor about the best ways to protect himself, such as using respiratory protective equipment.
Here are some steps can take to help prevent complications associated with COPD: