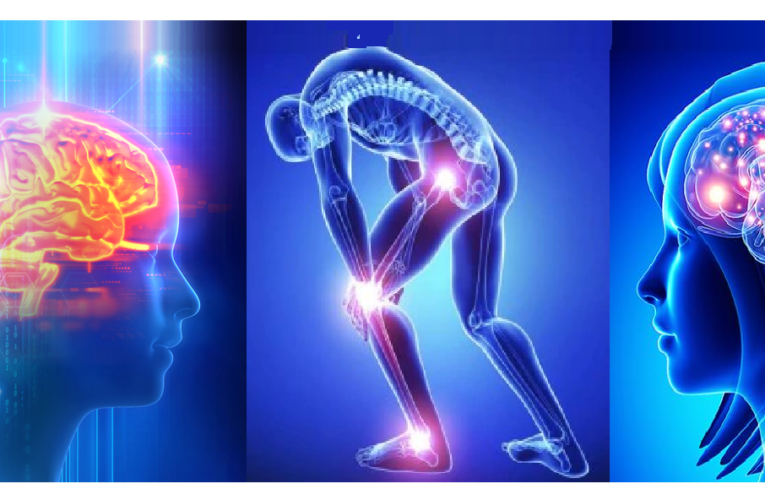 Parkinson’s disease (PD) is a chronic progressive neurological disorder that affects predominately dopamine-producing neurons in a specific area of the brain (substantia nigra) characterized by shaking, stiffness and difficulty with walking, balance and coordination that affects movement. It develops gradually, sometimes starting with a barely noticeable tremor in just one hand. But while a tremor may be the most well-known sign of Parkinson's disease, the disorder also commonly causes stiffness or slowing of movement.

Nearly one million will be living with Parkinson's disease in the U.S. by 2020, which is more than the combined number of people diagnosed with multiple sclerosis, muscular dystrophy and Lou Gehrig's disease (Amyotrophic Lateral Sclerosis). Approximately 60,000 Americans are diagnosed with Parkinson’s disease each year. The National Institutes of Health (NIH) note that, in the United States, around 50,000 people receive a diagnosis of PD each year, and around half a million people are living with the condition.The prevalence of PD in the U.K. is about one in 500 people, with a total of about 127,000 people living with the disease.

Parkinson's disease affects about one million people in the United States and ten million worldwide. The main finding in brains of people with Parkinson's is loss of dopaminergic neurons in the area of the brain known as the substantia nigra. In Parkinson's, certain nerve cells (neurons) in the brain gradually break down or die. Many of the symptoms are due to a loss of neurons that produce a chemical messenger in the brain called dopamine. When dopamine levels decrease, it causes abnormal brain activity, leading to signs of Parkinson's disease. The cause of PD is unknown, but several factors appear to play a role, including:

Parkinson's disease symptoms and signs may vary from person to person. Early signs may be mild and may go unnoticed. Symptoms often begin on one side of the body and usually remain worse on that side, even after symptoms begin to affect both sides. 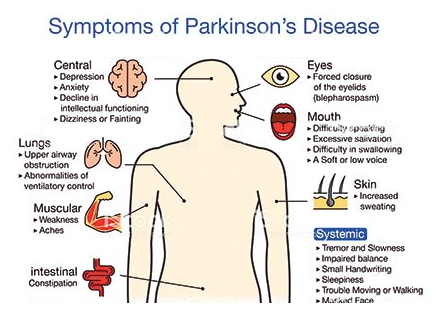 Parkinson's signs and symptoms may include :

There’s no specific test for diagnosing Parkinson’s. A number of disorders can cause symptoms similar to those of Parkinson's disease. Diagnosis of Parkinson’s disease is made based on the patient’s health history, a physical and neurological exam, as well as a review of signs and symptoms. Physician may order tests, such as blood tests, imaging test to rule out other conditions that may be causing symptoms of Parkinson’s disease.

Parkinson's disease is often accompanied by these additional problems, which may be treatable: 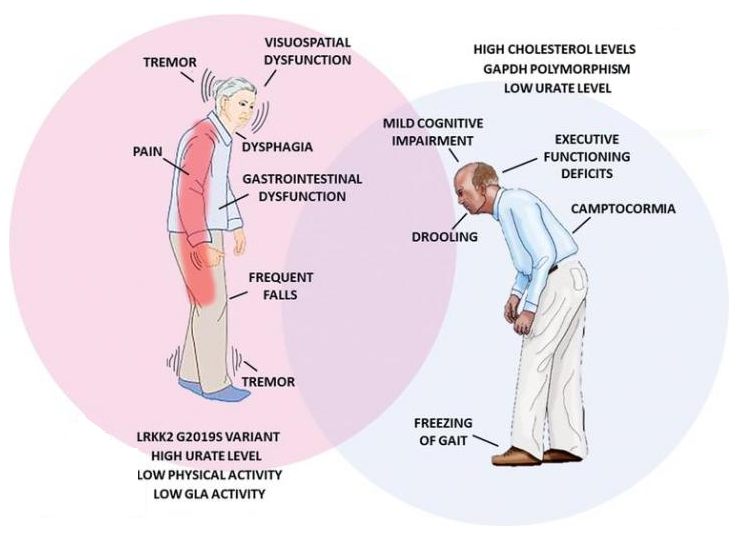 Parkinson’s disease can't be cured, but medications can help control the symptoms, often dramatically. In some later cases, surgery may be advised. Doctor may also recommend lifestyle changes, especially ongoing aerobic exercise. In some cases, physical therapy that focuses on balance and stretching also is important. A speech-language pathologist may help improve speech problems.
A. Medications :
Medications may help to manage problems with walking, movement and tremor. These medications increase or substitute for dopamine, a specific signaling chemical (neurotransmitter) in the brain. People with PD have low brain dopamine concentrations.

However, dopamine can't be given directly, as it can't enter in the brain. Patient may have significant improvement of his/her symptoms after beginning Parkinson's disease treatment. Over time, however, the benefits of drugs frequently diminish or become less consistent, although symptoms usually can continue to be fairly well-controlled. Medications may prescribe include:

B. Surgical procedures
Deep Brain Stimulation (DBS) : In deep brain stimulation (DBS), surgeons implant electrodes into a specific part of the brain. The electrodes are connected to a generator implanted in the patient chest near the collarbone that sends electrical pulses to the brain and may reduce PD symptoms. Doctor may adjust the settings as necessary to treat his/her condition. Surgery involves risks, including infections, stroke or brain hemorrhage. Some people experience problems with the DBS system or have complications due to stimulation, and doctor may need to adjust or replace some parts of the system.

Deep brain stimulation is most often offered to people with advanced Parkinson's disease who have unstable medication (levodopa) responses. DBS can stabilize medication fluctuations, reduce or halt involuntary movements (dyskinesias), reduce tremor, reduce rigidity, and improve slowing of movement.
DBS is effective in controlling erratic and fluctuating responses to levodopa or for controlling dyskinesias that don't improve with medication adjustments. However, DBS isn't helpful for problems that don't respond to levodopa therapy apart from tremor. A tremor may be controlled by DBS even if the tremor isn't very responsive to levodopa. Although DBS may provide sustained benefit for Parkinson's symptoms, it doesn't keep Parkinson's disease from progressing.